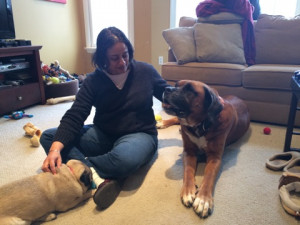 In general, animals tend to be very sensitive to, and aware of, energy.  They sense how people feel and what is going on in their environment.  When offered frequencies of energy that are specifically geared towards healing, they tend to absorb the energies very quickly.  During an energy healing session, animals tend to get very relaxed.  They will often communicate through Taruna about anything related to the healing or that they want their owners to know.  Thus, animal communication often occurs in the context of an energy healing session.

How can energy healing help my pet?

Physical Healing may include –

Emotional / Mental healing may include – 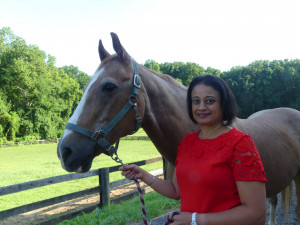 “We have found in energy healer Taruna Barber Ph.D the real deal. She has not only accurately relayed some information learned from several of our animals, she was able to help them get beyond some very heavy emotional trauma with a visible improvement in their demeanor.” – Encore Stables

“We have had excellent results using Taruna’s skills to help with behavioral issues, chronic lameness, and trust problems between horse and rider. “

“Our rescue, Polly was destructive every time we left her alone.  She tore up papers and books, pulled things off the table – even used the sofa as a bathroom.  Ted and I were at our wits end and were considering returning her to the rescue organization. After Taruna did a reading and cleared away her fears – and there were many – she is a new dog.  We can leave her alone and come back to an orderly home and we feel like she is a real member of the family.  I can’t thank you enough, Taruna.  What you did was transformational for all of us.” – Jan Maresh, Longmeadow, MA

“Arthur (horse) had a bad accident in the field 11 weeks ago. He was out fooling around and somehow flipped over backwards and fractured his pelvis, neck, and ten of his spinous processes that make up his withers. All of these injuries by themselves are serious, but combined they were life-threatening. Six days after the accident, when he still could not put his head down to eat nor lay down, Taruna did a session with him. I had not told her or anybody else for that matter the severity of the situation and my suspicions that the pelvis was involved too. The very first thing Arthur wanted to know before he let her work on him was “Am I dying?”  Taruna asked me to respond. “Not today” was all I had since we did not know how it would go.   She did a body scan energetically from outside the stall. She quickly located all of the areas that were a concern and kept coming back to the pelvis as the most dire injury. Even the vets had discounted my concerns for the pelvis. She applied healing to the body. Within an hour, Arthur walked out of the barn in five minutes instead of twenty, and attempted to eat grass. He had not been able to do this before. Five hours later he marched out of the barn, across the parking lot, put his head down and ate grass non-stop for 45 minutes. To appreciate this, you have to understand the night before I sat in the barn aisle with treats and he physically could not put his head down to the ground to get one. Four days later, on day 11, he still wasn’t laying down which was becoming life-critical. Radiographs revealed all the fractures so at least we knew exactly what we were dealing with and I could tell Arthur via Taruna that the way he was broken would still support laying down and getting up (The getting up part is when things usually break worse). That night Taruna did a healing and he lay down that same night. The next day he peed and peed, releasing toxins and visibly the swelling went down before our eyes. He came off the heavy pain and anti-inflammatory drugs that same day. Today is 11 weeks and the vet, chiropractor, and masseuse are all shocked at his level of soundness and likelihood that he will return to a riding career. We have a long road ahead, but I credit Taruna with being what we needed to get things going faster in the right direction.   Arthur can now walk, trot, canter, gallop, and buck and unless you have a trained eye, most days you wouldn’t know he’s recovering from serious injuries.”  – A.H.

“I was referred to Dr. Taruna Barber by my Veterinary Chiropractor, Dr. Amber.  Dr. Amber had initially tried to work on my 10 year old little dachshund, Pepper, who had suffered a back injury, however was unable to get close. Pepper was very frightened. The chiropractic work was very much needed to provide her with some relief as she was not walking well and her hind legs could not support her body.   Pepper had come to me as a throw away breeder pup, malnourished and had been severely mistreated. She was very skittish of strangers and now with an injury she was also very tense. Dr. Amber asked if I would consider consulting with an energy healer who she had met in the field. This  energy healer was doing incredible work with animals as she relayed to me what she had witnessed at a barn. Dr. Amber felt that Dr. Taruna might be able to help Pepper be more relaxed in the sessions by helping her to release pent up fears.    Dr. Taruna was thoughtful in preparing me for the appointment and how I needed to prepare Pepper for the same, as if speaking to a little child with a reassuring, thoughtful tone. The appointment was done distantly, with Dr. Taruna over the phone.  When the appointment began, Pepper went right to sleep which was interesting, but she had just eaten.  As she worked on certain areas, those areas would twitch pretty significantly and Dr. Taruna was expressing that Pepper had suffered greatly and had a great deal of trauma around her neck as she would fight with all her might to get away. I had not even mentioned that when Pepper came to me her neck was in very bad shape and she had a very sore voice box.   Dr. Taruna continued to work on Pepper for an hour. When she was finished, I don’t remember if she said, “Ok, she can wake up now,” but Pepper woke up quickly and was all perky and happy.  Dr. Taruna said she might sleep and drink a lot over the next 24 hours. I told her she is wide awake.  I said my thank you’s and goodbyes as Pepper wanted off the bed quickly. She was standing up and was all wiggly and happy. She pranced and ran to the door.   Thrilled, I went to the chiropractic appointment the next day and Dr. Amber was walking in as I was walking Pepper up and she was like OMG, she looks great! She was pulling and walking me, lol. Dr. Amber did a final adjustment and determined that Pepper did not need to come anymore other than for maintenance or if there was a problem.   So much appreciation for this talented woman. Thank you Dr. Taruna Barber for your sensitive expertise. We are grateful.”  –  Kara Lee, Sparks-Glencoe, Md

“I just wanted to say thank you for our session a few weeks ago. ‘Casey’ (horse) moved this past Saturday, and everything went really well.  Casey is settling in nicely and I believe a big part of that is because of the session. She has completely shocked me how well she handled the move and every day thus far with continuing to learn the new daily routine and surroundings.”  — Anonymous

“Taruna Barber, PhD spent a few minutes with Pogo (horse) one morning and in those moments she saw him as a happy foal, then sometime after his happy time he showed her a traumatic experience where he was feeling crowded and scared inside something that was moving and shaking. She said he had a great deal of trauma from this experience that had settled in his left hip.    What Taruna didn’t know was that Pogo had been put on a truck packed with Premarin foals in South Dakota that was coming east to the New Holland horse auction in Pennsylvania. She didn’t know we’d spent the last year working with Pogo to help improve his biomechanics which were a side effect of a pelvic injury. Through Taruna’s ability to intuitively communicate with Pogo she was able to help us know we were correct in our assumptions about his pain and behavior, but then she worked energetically to help him release the trauma in an actual healing session. Both Pogo’s rider and chiropractor witnessed Pogo showing a physical change as he released the trauma. In his next ride, he was a different horse; he was more elastic, energetic, confident, and more interactive and participating socially with people and animals.   In addition to Pogo, Taruna helped us understand a little bit more about what events led up to the demise of our barn cat Rhett and ultimate peace. What she learned from Rhett coincided with where we ultimately found him.”